The Shrine of Baha' U’ llah

His full name was Mirza Husayn 'Ali Nuri, he was the founder of the Baha'i faith. Known to most by his title, the Baha' U'llah (which means Glory of God in Arabic), he spent his spent his time in confinement writing the formal teachings of the new religon. The shrine where he is buried just outside of Akko is surrounded by some of the most beautiful gardens in Israel. It is also the holiest of shrines, for Bahais who flock here on pilgrimages from far-flung regions of the world.

The son of a wealthy government minister, he was banished by the Shah of Persia and the Sultan of Turkey, from Baghdad, Kurdistan, and Constantinople (Istanbul), before arriving at Akko prison. His declaration in 1867 that he was the manifestation of the unknowable God, the “rightly guided leader” or imam-mahdi resulted in violence that ultimately led to his exile by the Ottoman government.

In 1868 he was banished, to Akko – where he spent the rest of his life, 24 years. Much of the time he was confined in the prison (see related article, An Ominous Former Prison) and was later under a sort of house arrest in a small house within the city’s walls. When he was finally given permission to move outside the walls of the city he took up residence at an abandoned mansion – where he is buried. His shrine is surrounded by exquisite gardens. Baha' U’llah was born on November 12, 1817 in Teheran and died on May 29, 1892 in Akko.

The 50 acre (200 dunam) gardens are not maintained by professional gardeners, but rather by volunteers from around the world. They come here typically for a year of service. During their stay, they are provided with a small stipend and place to live. Many diligently tend the gardens, while others guard the premises. This is considered holy work. 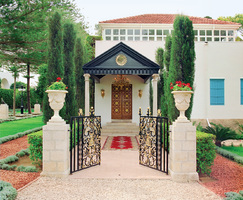 Entrance to the Shrine of Bahá’u’lláh, burial place of the Founder of the Bahá’í Faith, To Bahá’ís, it is the holiest spot on earth