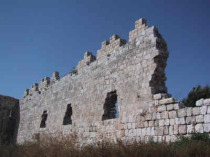 Located in the Sharon Plain, on the outskirts of Petah Tikva, at the headwaters of the Yarkon River, Aphek was among the earliest (fortified) royal Canaanite cities. It guarded the Aphek Pass of the Via Maris. This is the place where the Israelite's suffered one of the most devastating defeats – the loss of the Ark of the Covenant, to the Philistines. Paul was taken here on the way to Caesarea, according to the Acts of the Apostles.

From the Chalcolithic Period to the Ottoman Period the place that was previously known as Tell Ras el-'Ain, and later known as Tel Aphek-Antipatris was continuously inhabited. Its location was identified based on numerous Biblical, Egyptian, Assyrian, and Roman-Byzantine sources.

The Ark of the Covenant had, on numerous occasions, accompanied the Israelites into battle. As they prepared for the first major battle against the Philistines, they sent word to Shiloh (east of Eben Ezer), that the ark was needed. I Samuel 4:4, "So the people sent to Shiloh, and they brought from thence the ark of the covenant of the LORD of hosts, who sitteth upon the cherubim; and the two sons of Eli, Hophni and Phinehas, were there with the ark of the covenant of God."

In the battle that ensued, the Israelites suffered great losses. Reportedly, 30,000 men died. However, that was not the only tragedy. The Philistines, took the Ark of the Covenant, the most important symbol of the Jewish faith, to Ahdod and placed it in the temple of their god, Dagon. The following day, they found the statue of Dagon on the ground, on its face. (I Samuel 5). After yet another day, the statue was found decapitated. The ark was then sent on to Gath and later Ekron.

It was finally returned to the Israelites after seven months because of its apparent deadly effect on the inhabitants of any city to which it was sent.

After the return of the ark, it took another twenty years for the Israelites to once more believe in their god. In the interim they had abandoned their beliefs and had accepted other gods.

Today, as you approach Tel-Aphek from the road, you can see the remnants of the impressive Ottoman fortress, Binar Bashi, which was built in 1571. Once on the site, in addition to the fortress you can also see the remains of an Egyptian Governor's palace (dating to 1200-1550 BCE) and make out the remains of the ancient Cardo (main street), of the Roman city of Antipatris. Herod the

Great built Antipatris to honor his father, Antipater. The city of Antipatris was destroyed in the earthquake of 363 and was the site of many battles between the Jews and the Romans.

Looking at the plains below, one can only imagine the fierce battles that took place here. Tel Aphek is part of the Yarkon National Park. On site, you'll find an area shaded by large Eucalyptus trees, which is quite a suitable location for a picnic.

Note: Another great battle, between the Israelites and the Philistines, took place on Mt. Gilboa.

Directions: The Tel Aphek/Yarkon National Park is located on the Petah Tikva-Lod road, on Route 483 between Kibbutz Givat Hashlosha and Kibbutz Einat.